A few weeks ago, I was the recipient of a random act of genealogical kindness. A fellow researcher
provided me with several articles from the Norfolk, Virginia "Journal and Guide", which featured, or pertained to some of my maternal ancestors. If you missed the post about this, and would like to read it, you can click here.

It has taken me some time to be ready to post about the article which affected me most, but now the time has come. If you follow this blog, you probably already know, or at least sense, that I was extremely close to my paternal grandmother, Anna Green Yarborough. However, my relationship with my maternal grandmother, Mary Davis Thomas, was more distant, even though she lived in closer proximity to me. I never spent much time thinking about this - it's just the way it was. I loved her, and I knew she loved me, but we just didn't have a very intimate personal connection. Grandma Thomas didn't say much (not around me, anyway), and unfortunately, though I saw her often, and she even lived with us in her later years, my memories of her as a quiet, and rather stoic person, make it difficult for me to truly recollect much about our interactions. This said, I'll now admit that when I received the email from Hollis Gentry, with the links to to the nine articles about my family, the very first one I read , which saddened and stunned me, caused me to reflect long and hard about life of the woman whom I'd only known as my, "Grandma Thomas", whose her young adult life was shaped by a series unfortunate events through which she (as seems to be the case with all of the women in my ancestry) perservered, overcame, and maintained her Christian faith.

I did not grow up knowing that my grandmother had been married before or after she married my grandfather, but when I found out as an adult that she had, and I asked what had happened to the first husband, I was only told that he'd "died on the railroad". So, when I opened this first article from Hollis, and really came to terms with what my grandmother, then a young bride must've gone through, I began experience a feeling of mourning, as if I'd been there with her when she got this terrible news, and experienced the first, of what would eventually be three spousal losses.

Yes, my maternal grandmother's first marriage ended when her husband, only 27 years old, was crushed between two train cars.  They'd not had any children, so I'm assuming that the life they'd been building together came to an abrupt and unexpected end when Allen left for work that morning.
Posted by Renate Yarborough Sanders at 10:36 AM 6 comments: Links to this post

This post serves as my submission for the third installment of the Carnival of African-American Genealogy: In Memoriam, African-Americans In The Military 1914-1953, which is being hosted by Amy Cain, of Reconnected Roots. For this installment, we are asked to feature an ancestor, relative, or another person who served in the military between the years 1914-1953.  The military hero who will be the subject of my post is my father, Retired  Major Arthur Person Yarborough (deceased).

Before I begin, I must offer a disclaimer, that although I live and grew up in an overwhelmingly military area, flanked by bases and personnel from each of the five branches of the Armed Services, I, myself, am not well-versed in the lingo, nor do I have an in-depth understanding of military protocol.  For that reason, and since I don't quite have the time to research it fully before the deadline for this carnival, I'm asking forgiveness of any readers who may find fault in the way I reference anything about my father's service.  If corrections are offered, I will verify, then edit. :) 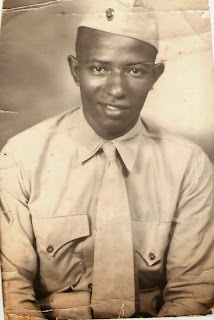 My father, Arthur P. Yarborough, joined the Armed Forces in the early 1940's, as one of our nation's first Black Marines.  He completed training at Montford Point, and from there, went on to serve in the South Pacific Theatre. His DD-214 form (on which he is classified as, "Negroid"), shows that he left the Marines, in 1945, but later re-enlisted as an Army soldier. During the interim period, my dad spent a semester at North Carolina A&T and then worked for a short time at the shipyard in Newport News, VA, and as a truck driver for the lumber yard in his hometown of Louisburg, NC.  He then entered the Army, and began what turned out to be over twenty years of very distinguished service to our country.  My father retired from the United States Army (with an honorable discharge) on July 31, 1964 after 20 years, 1 month, and 24 days of service. Of that time, he spent more than nine years in foreign and/or sea service. 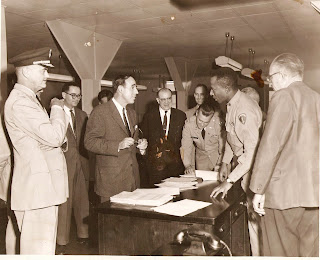 I have no idea what's going on here, but it's clear that everyone is listening to my father!

When my father retired from the Army, I was only 2 and 1/2 years old.  Though my two oldest siblings lived the "military life" and got to travel and live on military bases, my brother Arthur and I grew up as civilian children, only using the base to shop, go swimming, bowl, and go to the movies.  Because of this, I never really saw my father as a military man, and I had no idea how highly commended he was until after his death.  This saddens me to this day.  My father, being the humble man that he was, never rang his own bell.  I didn't grow up hearing about his military service - his salutations, honors, nor his high ranking amongst his classes.  Neither he, nor my mom ever talked about these things, and the plethora of certificates and medals that I've now discovered were never displayed on the walls or shelves of our home.  What I've learned since my father's death is that he loved and honored the United States Army, but as much as it brought him pride and pleasure, it was also the source of institutional racism, which caused him to have to fight just as hard within his ranks, as he did on behalf of our country.  Despite this, he earned the rank of Major, before he chose to retire in 1964.
As much as I wish I knew some stories to tell about my father's service, I don't; so I'd like to use this space to list just a few of the awards and honors he received during his service career.  There are far too many to list them all, and again, I don't have the background knowledge to really discern which are more important than the others, so I'll just list the ones that are on his DD-214. 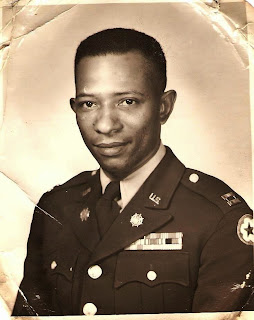 My father was meticulous in his record-keeping (a characteristic no-doubt instilled in him by the Army). It's been tough trying to decide which pictures and/or documents to include in this post, but I think this one that I just found amongst his certificates will give readers an idea of how organized he was.

The document below is his certificate for The Commendation Ribbon with Metal Pendant (First Oak Leaf Cluster), given February 25, 1958. 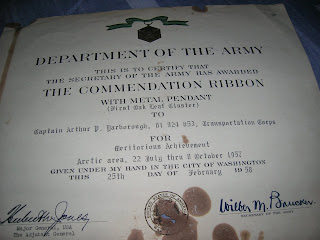 Next, here's a letter, or write-up of some sort, (explaining his meritorious achievement) which I'm assuming he was given along with the certificate. (Take special note of the paper clip in the corner.) 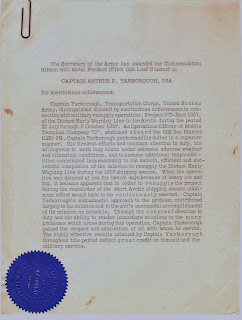 Here's what was under that paper clip. :) 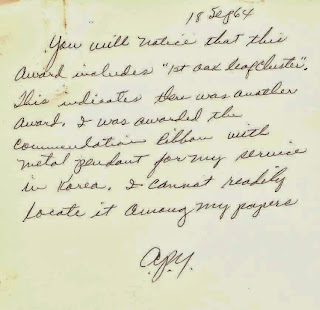 That's "Arthur P" (as we called him behind his back) - covering all his bases.  I'm just like that - and I was just reminded of why.

I miss you, Daddy.  May God rest your soul.

Posted by Renate Yarborough Sanders at 10:29 PM 15 comments: Links to this post