Church Records for Genealogical Research - What a Find!

A couple of nights ago, I decided to to take a look at the FamilySearch catalog to see if there were any online entries for Louisburg, NC that I hadn't already read, but wanted to. I decided to look at the digitized records for St. Paul's Episcopal Church, which cover the years 1845 to 1964. I knew that some of my European ancestors were connected to this church, so I thought I'd take a peek to see if any of them were mentioned. They were, but from the very beginning I realized that this document was going to be lucrative for me in ways I hadn't imagined; even then, I had no idea of the genealogical loot I was about to collect.

The first thing that raised my interest was seeing the name of my great-grandfather, Calvin Yarborough’s last owner, James H. Yarborough, on the pages before me. It seemed that he was greatly involved in the church - a fact that was soon explained by documents naming him as part of the church’s vestry. Not only was James quite active in the church, but his second wife, Arete, who would become Calvin's final owner (after James' death), and her father, Dr. Wood T. Johnson, and sister, Otelia, were, too.
I decided to commit to reading through the entire 522 images in this record set (two pages per image, in most cases) when I realized its scope. Not only would I be reading about church business, such as assignments of rectors, financial giving, appointments of vestry members, etc., but in what seemed like a (genealogist's) dream, births, deaths, and marriages were annotated, as were baptismal records and information about burial locations.

This excerpt from the marriage records notates the nuptials of my great-grandfather’s second owner, Elizabeth Temperance (“Tempie”) Neal to his third owner, James H. Yarborough on November 29, 1853.
There was also a section showing purchases of cemetery plots, with complete descriptions of each plot and its location! This is a goldmine of information, and I suggest that anyone with ties to Louisburg/Franklin County take the time to browse these amazing records. But, for me, the real treasures came in finding that these records also included tons of information about African Americans in the community, the greatest of which was related to formerly-enslaved individuals (with family data included), but some of which was regarding post-Reconstruction interactions with blacks in the community. Here is just a sampling of the goodies: 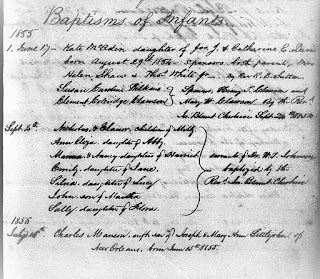 This is one page of many which gives details about infant baptisms. What struck me is that, on most pages, the baptisms of "servants" were intertwined with those of the regular parishioners, just as seen here. They were not separated by race. This was also true of the adult baptisms, deaths, and other records. Notice that the names of the parents are given with those of the enslaved infants.

Dr. Wood T. Johnson was a member of the Vestry and was, by far, the most active parishioner in getting his enslaved servants baptized. He was also the father of my great-grandfather, Calvin's last owner - his daughter, Areta E. Johnson Yarborough, also an active member of this church.

Burials
This next document shows burials that were recorded in the church records. The blue circles indicate members of my great-grandfather's enslaver's family. None of this was new information, but it was fulfilling to see it confirmed in another context.


This brings me to what was one of the most fascinating (and completely unexpected) finds in this entire record set. Recently, I've discovered that I have a direct ancestral connection to Somerset Place, the large Washington County, NC plantation, originally owned by several generations of the Collins family, which I just visited on a "field trip" with my AAHGS chapter, in June. (You can read about my visit to Somerset, here.)

Three generations of my mother's paternal grandmother's line were enslaved at Somerset, with my great-grandmother, Pinkey Tredwell, actually being born on the plantation. Pinkey, along with her parents, Mack Tredwell and Amy Littlejohn, were among the almost 300 enslaved who were transferred by owner, Josiah Collins III, to Franklin County during the Civil War. There, he established a plantation called "Hurry Scurry", where the conglomerate would remain until after the war's end.

It is written that Josiah III was a dedicated Episcopalian and that it was important to him for his human chattel to be trained in the teachings of this faith. At Somerset, he'd hired someone to "convert” his enslaved population "from Methodism to the Episcopal Church", He also employed a private chaplain, George Patterson, to perform religious services on the plantation. Apparently, Collins III must've connected himself, immediately, with the Episcopal church in Louisburg upon his arrival in the area. The documents below show submissions of many deaths among the enslaved at Hurry Scurry, some of which are known or suspected family members of mine. 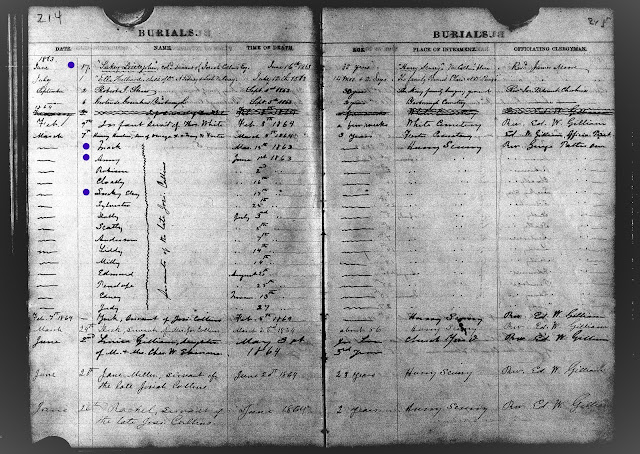 This page includes the death and burial information for 20 of Hurry Scurry's enslaved. The blue dots indicate known and/or suspected members of my family. (The Mack and Amy are not my second gg-parents, but I believe they may have been two of their children.) Notice the name of the officiating clergyman for the majority of the burials: George Patterson, who was the same person Josiah Collins III had hired as his chaplain back at Somerset. 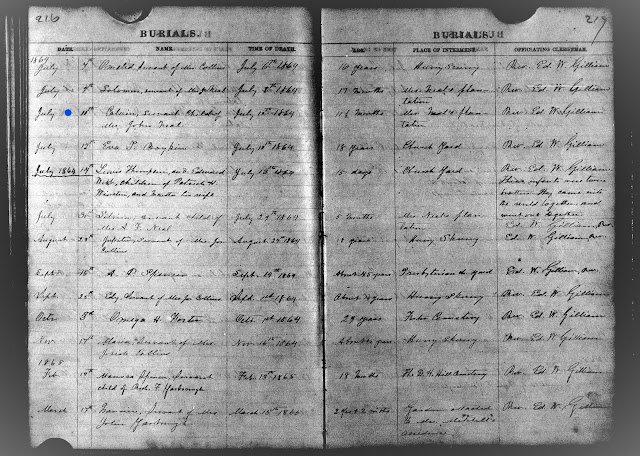 On this next page, 4 more burials of Hurry Scurry’s enslaved population are recorded. Notice their owner is now Mrs. Josiah Collins. Josiah III died in 1863, the same year as the bulk of the entries on the previous page. Presumably, sickness or disease must’ve struck Hurry Scurry in 1863.

Church Business
Of course, this record includes a compilation of church business – namely minutes from meetings of all types, with the bulk being meetings of the vestry. Admittedly, as I got past the first years of the 20th century, my interest in the subject matter began to wane, and I found myself scanning, rather than actually continuing to read the documents word for word. Still, some items of interest were found:

No More Blacks in the Church

This resolution was proposed and unanimously approved by the members of the vestry on July 17, 1891. It reads as follows:
“A resolution was offered and adopted directing the Secretary to advise the Rev. Wm. Walker, Archdeacon of the colored work in this diocese, that the use of St. Paul’s church is hereafter forbidden for his services for the colored people in the town.” 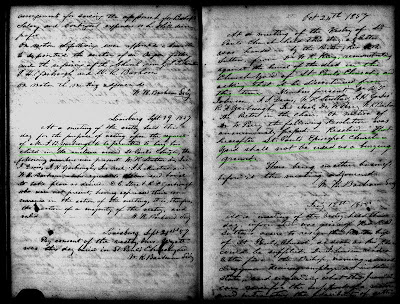 Left: September 19, 1857, Mr. J. B. Yarborough requests permission to bury his child in the enclosure around the church.
Right: October 24, 1857, a resolution is passed preventing the churchyard from continuing to be used as a burying ground.


Thanks for reading! I hope others will be helped by what's been shared here. I welcome your comments and would love to hear about how researching church records may have helped others!

Posted by Renate Yarborough Sanders at 2:48 PM 5 comments: Links to this post