This will be a quick post.  It was inspired by a question posed to me by George Geder, of Geder Genealogy, after a comment I made on his recent post about his grand-uncle, Frederick Geder.  George had included a copy of his ancestor's WWI Registration Card, and I noticed right away that, although Frederick was clearly of African descent, the corners weren't cut off of the bottom of his registration paperwork.  So, I inquired about this to George, and responded by asking me to enlighten him about this practice.

Well, I don't have all the details, but I see this as an opportunity to share something (for once) that I'm aware of, and that perhaps others, like George, may not have been.  Quite some time ago, I was engaged in a discussion in what I believe was the Afrigenas chatroom  on this issue.  At that time, although I'd found and save several of my ancestors' WWI Draft Registrations, I hadn't even noticed that, on a large percentage of them, either one, or both of the bottom corners had diagonal cuts on them.  After the chat, I went back into my documents and looked at them, and this was indeed the case.  However, there were some, like that of my my own grand-uncle, William Green (who was passing for White in NY), on which the corners were not cut. (See below.)

Before I responded to George, I googled the topic, and found right away that Ancestry.com had a copy of the blank registration form on their site, showing that it was actually a part of the written directions on the form to cut the lower left corner if the registrant was of African descent.  (All this time, I'd been thinking that it was just something that was being done "unofficially".  I know... I should have known better.)  You can see this copy, below: 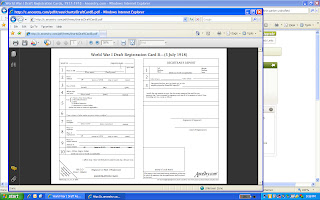 Another thing I did after responding to George's query is that I went into my files on Ancestry to take a look at a couple of my ancestors' forms, with the intent to send George a few copies.  I went right to my grandfather, Calvin YARBOROUGH, and his brother, Eugene, because I remembered having theirs and I knew that they had gone (presumably together) on the same date to register.  Upon revisiting their forms, I noticed something interesting:

Here's my great-uncle Eugene YARBOROUGH's first registration form, from June 5, 1917.  Notice the cut corners.
﻿﻿
﻿﻿ I also noticed the writing across Eugene's registration form, indicating that his registration was "Cancelled by order of the Adjucant General, May 12, 1918.  (I can't read the line under that.)  I guess finding out the reason for that gives me another "mystery" to work on solving.

Now, look at my grandfather's registration.  He and Eugene were brothers, less than two years apart, in age.  The corners are not cut.

Here is a picture of my grandfather, Calvin R. YARBOROUGH, Jr.  Like with George's ancestor, there is no question of his African ancestry.

On that day, my great-uncle Eugene re-registered.  Apparently, September 12, 1918 was the main registration date for Franklin County, NC.   Notice that this time, his corners are not cut, either.  Here's his second registration:
﻿
I have visited all of the WWI Draft Registration cards for surnames beginning with D, G, and Y for Franklin County, NC on Ancestry.com, and I've found that fairly consistently, the corners were cut for African-Americans.  What made them not cut them for my grandfather and his brother on September 12, 1918, is a mystery to me.
Oh!  I almost forgot: Here is the registration form for my grand-uncle, William A Green.  As you can see, he is designated as White, and his corners are not cut.  What makes this even more interesting (to me) is that less than two decades before this, when he was still a North Carolinean, William had actually served in the 3rd NC Volunteer Infantry, a colored regiment in the Spanish-American War.  Just one of those things that makes you go, hmmmmm, huh? :)

I hope this information has been helpful to other researchers.  If you weren't aware of this distinction being made on the WWI Registration Forms, you might want to go back and take a look at the ones you have for your ancestors, to see how they were "assigned".