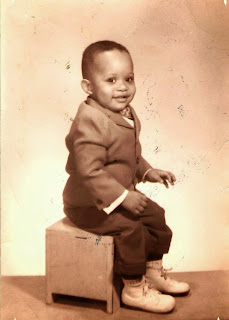 Today I had that "struck gold" feeling, even though I wasn't doing research! I guess I should explain, since my blog is so new, and anyone who's reading this doesn't yet know anything about me....

I grew up the youngest child of four, and the only girl. My two oldest brothers were 9 and 11 years older than me, respectively; they were "grown and gone" before most of my memories were made. However the youngest boy and I were less than 16 months apart, and we basically grew up like twins. Arthur was my BROTHER - my ACE BOOM-BOOM. He is the only one of my siblings with whom I experienced my whole childhood. My childhood was his childhood, and his was mine. We shared all of our secrets, our hopes, and our dreams for the future. But, unfortunately, the future was not his to live here on earth. Arthur died of liver cancer when he was 23. I was 22 years old at the time.

Anyway, today I was at my mother's unoccupied house passing the time away and I decided to go through an old file box that I'd brought into the house from the garage about 2 years ago. I knew that I'd glanced through it at that time, but it just seemed to be a bunch of file folders with hospital bills and newspaper clippings from when my brother used to write (while in college) for our local newspaper. But today, something was tugging at me to sit down and really go through the box - to open the manilla envelopes that were in there, so I did.

I opened the first envelope, and sure enough, there were a couple of medical bills, a certificate from my brother's social fraternity at Hampton Institute, and a paystub from a radio station that Arthur had worked for. I placed those things on the table and reached my hand back into the envelope, and then pulled out a handful of pictures. Pictures! Now, this was getting interesting!

The first few pics were scenes from Arthur's college days. There were some of his old girlfriends, and a few with his friends and frat brothers, a few of whom I knew. I almost decided not to keep looking, since I'd seen a lot of these types of his pictures before, but I kept going. In I reached again, and this time... GOLD! In my hand were long unseen photos of my grandmother, my parents, and even a few of my brother and me when we were little. As I slowly gazed upon the pictures, and reflected on my memories of each person, or each moment in time, I knew I'd struck gold. :) Three more manilla envelopes each held the same plethora of memorabilia, including a few more pictures in each one. The picture on this post is of Arthur as a baby. It was just one of the treasures I found today.
I don't know if my brother left these things like this, or if someone hastily just shoved this mixture of items into these envelopes and stuffed them into the file box when cleaning up his garage-room after his death, but I'm thankful for that "urge" that sent me digging for treasure today!
Posted by Renate Yarborough Sanders at 6:30 PM