The last several weeks have been tough ones for me. Although I've tried to keep up with all that's been going on in the genea-world, I've mostly done so quietly - not silently, but quietly. :)  However, because I'm somewhat front and center to the situation of the destroyed (burned) documents in Franklin County, NC, and since I wrote a post about what happened there on December 6, 2013, I feel the need to update any of my readers, who may not be aware of the what has transpired, since.

On that fateful day, as the records began to be brought out of the courthouse basement, I, along with another member of the Franklin County Heritage Society, stood helplessly by and watched.  It was then that I put out the first tweet, thus alerting others in the genea-world about the devastating action which was taking place.  Just a few hours prior to that, I'd received an email from the Heritage Society, stating that someone had heard that the records would be removed and destroyed, that day.  I just happened to be in Louisburg that day, handling some business related to the recent death of my aunt.  As I was on my way out of town, I decided to go by the courthouse to see if anything was happening.  When I pulled up to the courthouse, this is what I saw. 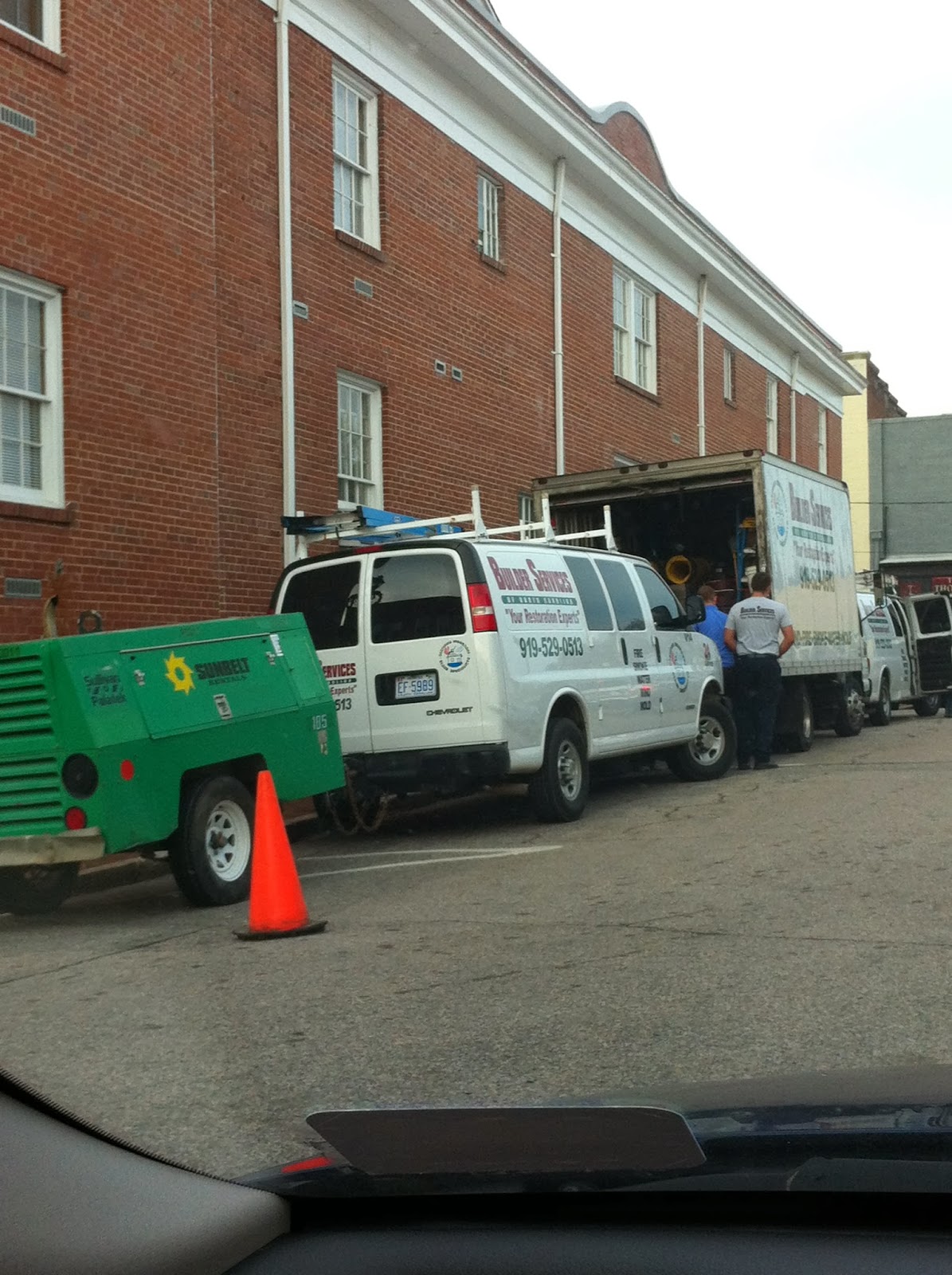 Although the information I'd gotten had implied that the deed was going to be done earlier in the day, when I pulled up to the courthouse at approximately 4:40 that afternoon, the company was just getting set up to begin carrying out the work they'd been hired to do: remove EVERYTHING from the basement room of the Franklin County Courthouse. The first newspaper account of this awful incident was posted the following Thursday, December 12th, in the Franklin Times, the county's weekly newspaper.  (Unfortunately, the public can't access past articles without a subscription, but the full text of the article will be posted below.) Another article was written in today's Times.  This link should work for one week.  http://www.thefranklintimes.com/index.php (Still, you have to subscribe to see the second page.)

The records were removed, and were taken to the incinerator at the county animal shelter to be burned over the course of the next few days.  Since then, as a result of the wide-spread Internet share-cycle that's taken place (via Twitter, Facebook, blogs, and genealogy sites), much attention is being focused on Franklin County. Researchers all over the country are deeply saddened and quite angry about this, and are lending their voices to the discussion, as well as directing commentary to the Franklin County officials, and the North Carolina Archives, who also played a role in this.

Although there have been several blog posts written, and many Facebook comments and posts, what I want to share here are, perhaps, the most poignant of the responses to the burning of these precious historical documents.  These are video snippets from the Franklin County Commissioners Meeting, which was held on Monday, January 6, 2013.  At this meeting, several concerned citizens, including some members of the Franklin County Heritage Society, came face to face with the County Manager, Angela Harris, who ordered the records to be removed and burned, and were able to personally ask her the question that has all of us baffled; WHY???

I'm proud of all of the speakers who went before the commissioners on Monday night.  It took a lot of "gumption" for them to come forward in this small town, where repercussions can come easily.  Some of the speakers have asked for an apology from the County Manager, and others asked for an explanation. But, at least one citizen called for Angela Harris' resignation.  I'm inclined to side with him; Angela Harris needs to burn her contract, just as she did my history.

As always, thanks for reading!
Renate

LOUISBURG — For decades, at least, records dating back hundreds of years had been stored in less than ideal circumstances in the county courthouse basement.  But four months after the Heritage Society of Franklin County procured a place to store the documents and formulated a plan to preserve them, county management had the records burned at its animal shelter.“We felt like we were stabbed in the back,” said Heritage Society President Patricia Leonard, who watched helplessly as a Creedmoor commercial restoration company, specializing in water and flood damage, boxed up the documents for a trip to the animal shelter —  where they were burned in the same chamber that was once used to dispatch of cats and dogs.

According to heritage society members, the clutter in the basement was discovered in the spring when newly appointed Clerk of Court Patricia Chastain examined the basement, apparently with the aid of Heritage Society members. The basement, which had been damaged by flood and mold, had become a depository for overflow records awaiting retention dates as well as other items deemed unnecessary or non-vital.They were then forgotten, heritage society members said.
The basement was also used for storage of other kinds of items, including old furniture and cleaning supplies. But a quick investigation of the records revealed boxes from most every department in Franklin County government, from the Register of Deeds, county finance, board of education, sheriff’s office, county jail and elections board. Quickly, said Heritage Society member Dianne Torrent, it was determined that the records were worth saving. One of those documents, Torrent said, was a hand-written letter from a soldier making sure his estate and his sister was being taken care of while he was away.  Torrent said that state archives staff told members that they had documentation of the soldier’s service, so the letter, itself, was of no value to them.  “Ask yourself, if you were that soldier’s family, what would you rather have? The information, or the letter in your hand?”

Because of the county’s decision, Torrent said, documents like that are gone, forever. “A time capsule of our history is gone, now,” she said. “The question I’ve asked (of the county) is can they live with the question of  what did you destroy?”

Although Chastain serves as Clerk of Court, the county owns the building and is responsible for its maintenance and upkeep.County management, heritage society members said, made the decision to destroy the documents.County Manager Angela Harris said she took action at the recommendation of state archives and court system staff.“All of the documents had retention dates that expired many years ago,” Harris said. “Due to the overall conditions,  we were given the advice to take immediate action and we did.”
According to County Finance Director and Director of General Administration, Chuck Murray, the county paid Builder Services $7,424.51.  Over a three-day period, beginning at about 4:30 p.m. on Dec. 6, Builder Services workers boxed up documents for transport. The company also did some  soda blasting, a process in which sodium bicarbonate is applied against a surface using compressed air.
The ceiling was sealed, a door was painted and the air was scrubbed — a process by which air particulates are removed.

Heritage Society members said they were not given a reason as to why the county moved as quickly as it did.  However, the State Office of Archives and History and the Administrative Office of the Courts had visited the basement and, by November, said relocation efforts would be futile because they had been damaged by mold.
That didn’t stop the state from taking materials that the Heritage Society had boxed up themselves from efforts to preserve records before county management told them they were no longer welcome in the basement.
Those documents, though, are being kept separate from other items in Archives, county staff said. The frustration, Heritage Society members said, is that  they were willing to preserve documents, at their own cost and own risk.  They had a place to keep them for six months and plans to digitize them and be done with the project in that time.  And, initially, the county had agreed to pay the uility bill for the donated space until it backed out of plans to preserve the documents.  “We were ready to go,” Torrent said. “The county gave us six months of electricity.  “We would have been done,” she said, “but they kept putting up stumbling blocks.  “The entire thing culminating in them destroying the records.”

It was a particularly crushing blow for Renate Sanders, a Heritage Society member and Virginia resident with nearly two decades of experience in genealogical research.  She has familial ties to Franklin and Warren counties, through both freed African-Americans, slaves, white people and others in between. Finding older documentation is difficult, she said. Finding information about former slaves is increasingly so.  Being able to peruse the documents in the courthouse basement, she said, provided a glimmer of hope that more of her roots could be discovered.“To me, it’s just devastating that something could have been burned that I will never have any exposure to,” she said.  She, like Leonard, could only sit idly by as a county contracted crew removed documents before they were burned at the shelter. “I just want people to know how very sad and disappointed everyone in research  community is,” she said. “There are people all over the country who are aware of this and are hurt and heartbroken.”  Sanders said she questions the legality of the county’s decision to destroy the records. And their motives, particularly, if the county was interested in hiding certain information.

There was no vital information, such as birth certificates or anything that members came across during their first foray into the basement.  And while there were documents from a number of departments in the basement, the Heritage Society, Torrent said, was more than willing to adhere to any chain of command the county required to make sure any sensitive information did not become public.  But, she said, that didn’t stop county staff, she alleges, from going into the basement and removing some items themselves. The discussion about sensitivity, Torrent said, “was just another stumbling block to slow down the process.” Now, with the documents destroyed, Leonard said the focus will be on making certain that history doesn’t repeat itself.

“This has stirred the will of many folks to get the Sunshine Laws changed,” Leonard said. “We hope within the next year or two, we can get some of our representatives and state senators to reword and change the law where the archives can have some records, the county can have some and there be a third choice. If a county doesn’t want them, if there is a historical society, they will have the ability to acquire those records. Because, when they’re gone, they’re gone."