Temporary Joy?
Today, I received a copy of the Social Security Application for my maternal grandfather, Daniel Webster Hill. I was so excited when I got the envelope from my mailbox, especially since I'd kind of forgotten I'd ordered this document. Daniel's life, as well as that of his mother and full siblings, has been challenging to document, either because of conflicting or absence of information.
My hope, when I ordered this document was that it would provide conclusive data, so I was quite excited as I carefully tore open the envelope. Instead, its contents have led me to more questions as I try to uncover the true facts of my grandfather's life. 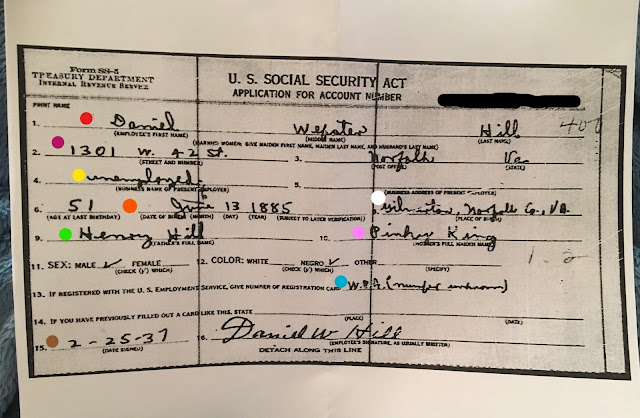 Out of this entire document, only two items bore no concern; my grandfather's gender (male) and race (Negro). Everything else either provided confirmation of my research or conflicted with previous findings, thus inciting further questions that will need to be answered.

Address (Purple and Brown): This was the first issue on the document. The address given is not the address of the home in which my grandparents lived while they were together. Family lore has always been that my grandfather left (abandoned) the family when my mother was 4 and her brother was 7. That would have been sometime between September 10, 1938 and March 23, 1939. However, this application is dated February 25, 1937, which precedes that date range by over a year and a half, making my mother not even 3, yet, and her brother, only 5. The only thing I can think is that perhaps he came back after this date, before leaving for good.
BUT.... there's another thing these two items actually corroborate for me! My late uncle, Howell Hill, who I interviewed numerous times about his and my mother's family and ancestry, told me something I haven't forgotten. In describing what he recalls as a domestic abuse situation between Daniel and my grandmother, Mary, my uncle told me how when Daniel Hill first left them, he just moved into a room in the house next door, and they would see him watching them from an upstairs window. He expressed how afraid this made him, because Daniel Hill "was so mean". Well, I used google maps to look up the address on the SS application, and, lo and behold, 1301 W. 42(nd) St. is right next door (though across a small street) to my grandmother's house, 1273 W. 42nd Street.


Employment (Yellow/Blue): In 1930, according to the Census, my grandfather was working as a Longshoreman at the Pier (usually meaning Lambert's Point). However, at the time of his SSA, he states that he's unemployed. Could this have been part of the issue that played into the problems he and my grandmother were (apparently) having? Also, Item 13 indicates that Daniel was registered as an employee with the W.P.A., something I wasn't aware of and will need to research further.

Age (Orange): Daniel Hill's true birth year has been an issue since I began researching him, many years ago. It seems that he began using this 1885 birth year around the time he married my grandmother. He was much older than she, so perhaps this was his way of smoothing that out. I really don't know. But, Daniel shows as a one-year-old in the household of his parents in 1880 and, in 1900, he is a boarder in the home of his mother and stepfather, enumerated as 20 years old with a birthdate given as March 1879. It's not until after his 1926 marriage to my grandmother that I first see him being referred to as a younger man -- with his age being enumerated in 1930 as 40, with whoever gave the information stating that he'd been 36 at the time of his first marriage. From this point on, any documents I've found on Daniel Hill give him this younger age.

Place of Birth (White): I have seen Daniel's place of birth given as Virginia on other documents, but I'm confused about that, since I know the family (both his mother and father) were from North Carolina, and he is enumerated with them, at just one year old, in that state. However, I guess it is possible that his mother could have been in Virginia (for some reason) when he was born, though I really doubt it. He lists "Gilmerton, Norfolk Co., VA" as his birthplace on this application. This is, indeed, where his mother, Pinkey, later lived and ran a boarding house with his stepfather, and where, according to the newspaper announcement of her death, she was buried, but she doesn't appear there before 1900. Perhaps she was visiting a family member at the time of his birth, just as she was at the time of her death? This will require further research.

Parents' Names (Green/Pink) - Daniel confirms his parent's names. but with exceptions. His father was known as "Henry" Hill, but his full name was actually Charles Henry Hill. (I think it's quite possible that Daniel may not have known that.) His mother, Pinkie's, maiden name has been another source of confusion. She'd been enslaved on Somerset Plantation, in Creswell, NC, which was owned by the COLLINS family. Her father was Mack TREDWELL, but sometime prior to Emancipation, her mother married a man named Peter KING. Pinkie has been recorded as using each of those surnames on different documents, so it's hard to know which (if either) was actually her "legal" maiden name. It does seem clear, though, that she considered Peter King to be her father figure and that seems to be what Daniel understood, also, according to this document.

Social Security Applications are typically very useful documents for genealogists; however, as this one shows, sometimes that usefulness can provide a mixture of evidence-types for the researcher: direct and indirect, consistent or conflicting, and, sometimes, negative or even absent. A careful researcher will study all of the information on a document, analyzing each item and following up with further research to work towards solving conflicts and/or filling in blanks. This SSA for my grandfather, Daniel W. Hill certainly is leaving me with more work to do, but I am up to and looking forward to the challenge!

Thanks for reading,
Renate